Everyone has the potential to play good defense, regardless of talent or age level. Defense is about heart, hustle, and attitude. Every player has the opportunity to make a significant contribution to the team by playing good defense.

A coach should focus on players’ feet sliding (rather than hopping or skipping) and players maintaining a proper defensive stance. Have fun with this drill! Allow players to express enthusiasm and desire by slapping the playing floor and yelling “DEFENSE” on command. Drill should last 20-30 seconds. Allow short rest and repeat as desired.

Variation: The defensive player can perform this drill with hands clasped behind their backs.

Focus on players making a drop step each time they turn (rather than crossing their feet) and on players sliding correctly while maintaining a proper defensive stance.

Partner Zigzag (with ball) – Offense dribbles from spot to spot and goes half-speed. Do not allow players to steal the ball. Next pair in line starts as preceding pair leaves first spot. 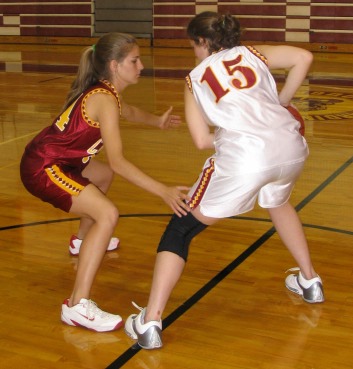